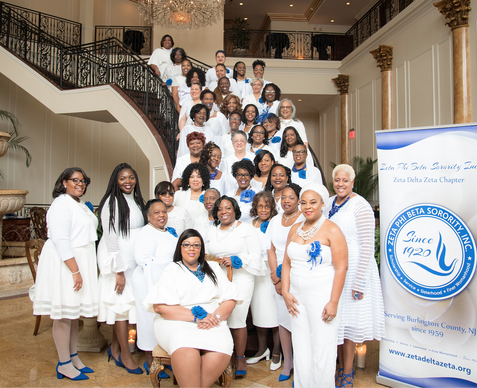 Zeta Delta Zeta Chapter was chartered on June 22, 1959 as the Graduate Chapter of Moorestown, which covers Burlington County in New Jersey. It was the fourth graduate chapter chartered in New Jersey with Soror Estelle V. Hall, now deceased, as the organizer and first Basileus.

On May 14,1968 an Amicae (Friends of Zeta) auxiliary, under the auspices of Zeta Delta Zeta was organized and chartered, The Amicae of Moorestown, NJ. Subsequently, an Archonette auxiliary was organized and charted. Since the inception of the Archonette Club, five Zeta legacies have been created. They are: Sorors Deborah Wilson of Zeta Delta Zeta Chapter, and Soror Kimberly Wilson of Delta Omicron Zeta Chapter, Boston Massachusetts, who are the daughters of the late Soror Glenda Wilson, Dr. Natoya S. E. Hill, daughter of Soror Pauline E. Gibson, Soror Geneva C. Moody, sister of Soror Deidre A. West, and Soror Kaitlin C. West, daughter of Soror Deidre A. West. In addition, the Amicette auxiliary was added to the chapter’s youth groups in May 2007. Today, all of Zeta Delta Zeta auxiliaries continue to flourish under the direction and guidance of Zeta Delta Zeta Chapter and their respective advisers.

Zeta Delta Zeta Chapter has been a leader for our beloved sorority. On two occasions, the chapter has hosted the Atlantic Regional Leadership Conference. In addition, the sisters of our chapter have provided monumental guidance to Zeta Phi Beta Sorority, Inc. on a myriad of levels. Zeta Delta Zeta has had the distinction of having Sorors in the Chapter serve as State, Regional and National officers. Our own Dr. Kathryn T. Malvern has served as National Educational Foundation Chair and National Representative to the National Council of Women of USA at the United Nations since 1996. We have had three past New Jersey State Directors: Dr. Kathryn T. Malvern, Soror Geraldine Johnson and Soror Pauline E. Gibson. Soror Gibson holds the distinction of the longest serving State Director to date! Our Soror Katrina Wallace was appointed  as Secretary and Board Member to the National Educational Foundation in 2007, Soror Geneva Moody was elected National Third Anti-Basileus and served from 2006-2008, and Soror Mary Singletary worked as Z-HOPE Coordinator - International Women of Color. We look forward to our Chapter Sorors continuing to serve and do the great work of ZETA.

Zeta Delta Zeta has served for almost sixty years as a catalyst in fostering the improvement of the quality of life through its community outreach service. Under the administration of Soror Geraldine Johnson, Soror Clara Bennett was appointed  the Chair of the Annual Career Day which started at Burlington City High School, and after two years, extended to Camden High School.  In partnership with Omicron Omicron Zeta Chapter, South Jersey Links, Inc. and South Jersey Continental Society, Inc., this program had been in existence for more than eighteen years. Under the administration of Soror Pauline E. Gibson, the Stork’s Nest Program was developed. This program was established to educate and assist expectant mothers to get the proper pre-natal care for their babies. During her administration, the chapter received many first place awards throughout the state and region. Furthermore, Zeta Delta Zeta Chapter continues to work in partnership with the March of Dimes to reduce the infant mortality rate within our communities.